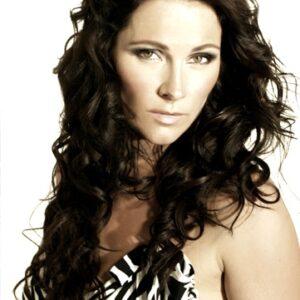 Jenny Berggren from Ace of Base

Jenny Berggren was the singer of the internationally renowned Swedish pop group Ace of Base and now is a solo artist.

The group’s first two released songs All That She Wants and Wheel Of Fortune coupled in the number one and number two spots on the Danish sale charts before a single publicity photo had ever been snapped of Ace of Base. The band’s album The Sign skyrocketed to the top of worldwide music charts in the early nineties, now selling over 25 million copies and making it the all-time most selling debut album ever—a title unsurpassed to this day

The group, originally comprising of siblings Jenny, Linn, and Jonas Berggren and later their friend Ulf Ekberg, started their music from the basement of the Berggrens’ house in their hometown of Gothenburg, Sweden.

Jenny and her fellow band members gave hundreds of performances through their concerts and promotions from 1992-2009, their largest audience being 55,000 in Tel Aviv.

Overall, Ace of Base released four albums plus a greatest hits record in less than a decade. Jenny, along with her fellow band members, stand out as four of very few Swedish artists to have earned two American music awards and two billboard awards. Ace of Base sold more than 40 million copies with their four albums.

In summer 2009, Jenny, Jonas and Ulf—again as a trio—held their Ace of Base redefined world tour.

Now, Jenny has produced her first solo album entitled My Story, along with her autobiography, To Win The World.

This website uses cookies to improve your experience while you navigate through the website. Out of these cookies, the cookies that are categorized as necessary are stored on your browser as they are essential for the working of basic functionalities of the website. We also use third-party cookies that help us analyze and understand how you use this website. These cookies will be stored in your browser only with your consent. You also have the option to opt-out of these cookies. But opting out of some of these cookies may have an effect on your browsing experience.
Necessary Siempre activado
Necessary cookies are absolutely essential for the website to function properly. This category only includes cookies that ensures basic functionalities and security features of the website. These cookies do not store any personal information.
Non-necessary
Any cookies that may not be particularly necessary for the website to function and is used specifically to collect user personal data via analytics, ads, other embedded contents are termed as non-necessary cookies. It is mandatory to procure user consent prior to running these cookies on your website.
GUARDAR Y ACEPTAR